What is the relationship between opening a lock and infosec? Why are you paying attention to that teenager activity? It is kind of an illegal kid's game!


When you open a lock you can grab a device, open it and tamper with it or get keys stored in a drawer, access an unprotected terminal, sensible printed documention, install an usb keylogger, video splitter, network sniffer, take a backup tape, or, why not, steal a production disk. Not enough, too corporate.


A key is an authentication factor [1][2], something I have.

Copying a key is like stealing passwords by means of shoulder surfing, keylogging or phishing.

You can ask a locksmith to copy them or take a photo or cast. Shoulder surfing is watching over someone else's shoulder while he is typing the password, keylogger is a program that captures every keystroke and send it to the attacker, phishing is asking someone to type his passwords in a fake web site under an attacker control.

To move the latch without moving the lock is like taking advantage of a crytographic system or web appliation design flaw, like CSRF or session fixation.

Can shim[3] of Devian Ollam is an example of the first, you use a can to open a padlock, like a credit card to open a door. To explain CSRF is not so easy, but it's kind of using the victim's session to make a transaction in a web application. Session fixation allows the attacker to get an authenticated session without getting the password.


Impressioning is the process of trying a blank key and filing where a mark appears until the lock opens and it is like a timing attack when you can recover a password from the variation of time in invalid login attemps.

I can not find a good comparisson for lifting. You open the lock pin by pin. It has some resemblance with a timing attack, but you open the door without getting the key.

If a password is hashed and the attacker get it and find another password with the same hash value (it is called colission) it is like having a master key.

If someone has the same passwords in different accounts, if one of the sites get compromised, the attacker can attack all the accounts. It is like having the same key for all the doors.


Bumping is bumping the lock with an special key and it is like changing the execution flow of a program with a buffer overflow. 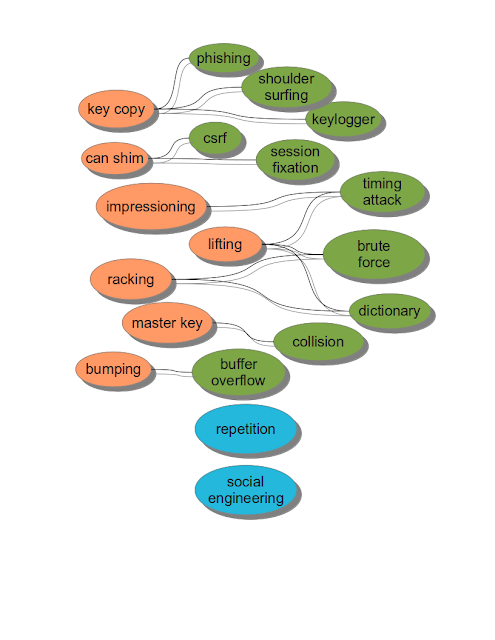 
(*) I guess that someone with enough experience could imagine the key and build it.
(**) Stronger passwords mean longer with numbers, symbols, upper and lowercase characters.

(***) The attacker that does not know the algorithm, can not find colissions. The theory says that the algorithm is not secrect, but defense in depth say so.

Not enough, too academic.

There is another answer related to mental state, attitude. The spirit of lockpicking is the same as the hacking spirit.

The feeling of opening a lock without the key is like hacking a system in a laboratory or ethical hacking, of course.

If you do not like my english, welcome aboard, please be kind.